Shortly before the advent of World War I the Sandy Hook area saw a period of rapid growth. It was a result of this growth and desire for community service that led a group of men to call an organizational meeting for a fire company that would protect and service the district of Newtown known as Sandy Hook. A meeting of the citizens of Sandy Hook, about 30 people, was held on Tuesday, January 12, 1917, in Glovers Hall to consider the question of fire protection.

Louis T. Briscoe called the meeting to order and outlined the purpose for which the meeting was called.  John O. Pitzschler was made Chairman.  A committee was appointed to confer with Newtown Water Company with regard to extending its water mains to Sandy Hook, as the Sandy Hook residents also desired the establishment of a number of hydrants in that district.  The committee appointed to confer with Newtown Water Company consisted of A.M. Briscoe, M.A. Corbett, E.W. Troy and Austin Hurd.

For the purpose of levying a tax to pay for the water it was proposed to incorporate Sandy Hook as a fire district.  A committee appointed to present this matter to the Legislature consisted of T.F. Brew, M.D. Beers, George F. Taylor and T.J. Corbett.  Deputy Sheriff Beers, T.F. Brew and T.J. Corbett "motored" to Woodbury on Wednesday afternoon, to confer with the Orenaug Fire Department in that town to get a line on plans for a fire district.  No definite boundary lines for the proposed fire district in Sandy Hook was made, but it was suggested going as far as the residence of Michael Haugh on Washington Avenue, out Gas Street (Riverside Road), and as far as the Fabric Fire Hose Factory toward the Highland Division Railroad Station.

Sandy Hook residents took real interest in the matter and it was hoped the project for the organization of the fire district would work out successfully. 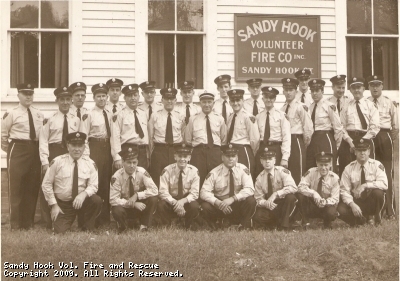 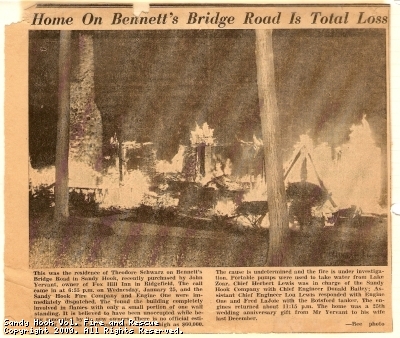 February 18, 2020: Porterville (CA) Fire Department Captain Ramon Figueroa, 35, and Firefighter Patrick Jones, 25, were killed in a fire at City of Porterville Library that had been set by two 13-year-old males.

The mission of the Sandy Hook Volunteer Fire & Rescue Co., Inc. is to strive for excellence in the performance of prevention of loss of life, personal injury and damage from fire, medical and other emergencies of any or all persons when called upon. We shall do this by maintaining a high standard of training and public education and act and perform in a safe, courteous and professional manner.

Volunteer firefighters display a flashing blue light to warn other motorists when they are responding to emergencies in their personal vehicles.

While Connecticut Motor Vehicle laws do not require motorists to pull over to the right, please be courteous and let them pass.

Remember: The faster we can get to the scene of a fire, an accident or a medical call, the sooner we can save lives. After all, you wouldn't want anyone to delay our response time if you needed to call 911, would you?

When you see the blue light, move to the right.

If you would like a patch please send a request, and $5, to

The Fireman's Prayer
A Fireman's Prayer
When I am called to duty, God
Wherever flames may rage,
Give me strength to save some life
Whatever be its age.
Help me embrace a little child
Before it is too late
Or save an older person from
The horror of that fate.
Enable me to be alert and hear the weakest shout
And quickly and efficiently
To put the fire out.
I want to fill my calling and
To give the best in me,
To guard my every neighbor and
Protect his property.
And if according to my fate
I am to lose my life,
Please bless with your protecting hand
My children and my wife.
Facebook Timeline
Upcoming Events
Every Monday
6:00pm
Work Session
Mon. Aug 24th 2020
7:00pm
Training: Engine Company Emergencies
Sat. Sep 19th 2020
11:00am - 5:00pm
Second Annual Sandy Hook Food Truck Festival & Craft Fair (new date)
Mon. Sep 28th 2020
7:30am - 3:30pm
33rd Annual Golf Tournament
Every 1st Monday
7:30pm
Company Meeting
Every 1st Tuesday
6:45pm - 7:45pm
SHOP Meeting
Picture Gallery

Copyright © 2006-2020. YourFirstDue Inc. All Rights Reserved. Designated trademarks and brands are the property of their respective owners. Content on this web site is supplied by Sandy Hook Volunteer Fire & Rescue. YourFirstDue Inc. cannot be held responsible or liable for any content, text, pictures, or any other media found on this web site. Maintained by the members and staff of Sandy Hook Volunteer Fire & Rescue.
Management Login
Powered by